Not long ago, my husband, Paul, got a letter from his Aunt Lorraine, which contained a clipping from the Wall Street Journal. The headline read, "Speak Now? What to Do When You Disapprove." An article about what to do when you don't like the significant other of a friend, or, say, a beloved nephew.

Subtle, I’m thinking. Aunt Lorraine hates me. Why did she wait until our six-year anniversary to break the news to Paul?


Then, we turned the clipping over to find another headline, “When Man’s Best Friend is Obese," about the growing scourge of Pet Obesity. (In America, of all places! Can you imagine? ) Personally, I would’ve gone with the title, “When Your Cat is a Giant Fat-Ass.” (Which may be why I ‘m writing this in a blog with a name that’s a play on an awful Jimmy Buffet song, rather than  Wall Street Journal. Ahem.)


This clipping was yet another in a long slew of not-so-subtle hints from friends, loved ones, and random UPS delivery people, suggesting that our cat, Seymour, “be needin’ some serious Jenny Craig.”
You see, Seymour weighs in at just over 25 pounds. In human terms, that’s roughly “Drug-Addicted Fat Comedian About to Die in a Pool of His Own Vomit” fat. He’s like Jared before the Subway diet.  Or Al Roker before … oh, hell. You get the picture.


Every time we take Seymour to the vet, she gives us That Look. As if we were using a funnel to pour food down his mouth, like some French farmers do to engorge the livers of ducks destined to become fois gras. I’ve explained that we really don’t feed him that much. Honestly. I’m pretty sure Seymour’s liver would not be nearly so delicious on a cracker. 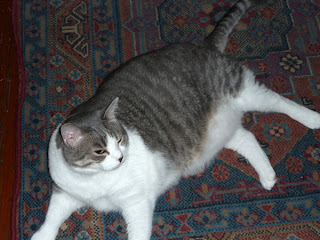 Apparently, cutting back on the cat chow isn’t enough. Some experts say that you should help your cat “work out” as much as an hour a day. What these so-called “experts” (with an M.S. in Feline Pilates from Full Sail University) don’t seem to understand about cats is that … THEY ARE CATS.

Cats don’t do anything they don’t want to do. Ever. A dog will chase a Frisbee, or fetch a stick just to make you happy. You may even be able to coax your dog onto the $971 (+ shipping & handling) dog treadmill you bought from the SkyMall catalog that time you got drunk on a cross-country flight and realized, “hey, this plane has WiFi! Woo-hoo!” Your Cocker Spaniel will take pity on you and your fiscal irresponsibility. Your cat will turn up its nose and silently quote Milton Friedman before using the Pet Treadmill as a thousand-dollar litter box.


You see, cats just don’t give a crap. Don’t get me wrong—I’m a cat person; a card-carrying member of Future Crazy Cat Ladies of America. As such, I know that cats never, EVER do anything they’re not 100% psyched about doing. And only when they 100% feel like it. It’s like living in a house with a French civil servant.

Cutting back on the Fancy Feast is one thing, but expecting cats to exercise?  This is just another example of our society’s bad habit of creating expectations that aren’t even vaguely aligned with reality.
In the parallel universe where cats are willing to exercise, plucky senior citizens in South Florida really do go speed-walking in track suits like in Metamucil commercials, instead of driving their Rascals twenty feet to the mailbox. Housecats can be persuaded to exercise in that world where abstinence is a fail-safe form of birth control among teenagers; where “novelty tobacco pipes” have never, ever been used for smoking weed; where everyone’s thinking only of the person they’re having sex with during sex.


And yet, experts still insist putting your fat cat on a “fitness regimen.” Even if said regimen would pretty much require quitting your job to become a personal trainer for your cat. As much as that would be a fun resignation letter to write, it may not be practical for ALL pet owners.


Still, I wonder what that would look like, in the entirely fictional version of the world where such a thing were possible? Hmmm….

Cue the theme song from “Rocky.”  Ripple to a suburban house:


Enter RESPONSIBLE PET OWNER (RPO), in a track suit, dangling a feather on a string in front of OBESE CAT. Cat looks at RPO, thinking, “This dude be crazy!” An hour passes. RPO’s blood pressure mounts.  Cat saunters over to food bowl. Meows. RPO continues to run around the house with a feather on a string. Cat licks butt. RPO dies of a heart attack. Cat eats RPO’s face.


Alas. In this universe, Seymour will live to be fat another day. Hopefully, he won’t have to eat our faces any time soon.
Posted by Marguerite Kennedy at 6:54 PM