Yes, the above is a Sponge Bob Square Pants t-shirt. I’m not sure what inspired this purchase. Amazingly, alcohol was not involved. Don’t get me wrong – I like Sponge Bob as much as the next person. Just not quite enough to walk around with him winking on my chest.
If you’re not familiar with the show, the titular Bob is a sea sponge who lives in the subaquatic town of Bikini Bottom. His best friend is Patrick, who, as far as I can tell, is some sort of underwater condom. Diane the Diaphram, Denny the Dental Dam, and various other anthropomorphic contraceptives pal around with the pants-wearing sponge.
﻿
I'﻿ve never actually worn the shirt in question, which I got at a thrift store. Wearing this in public seemed like it would be the final nail in the coffin of my sartorial devolution since moving to Seattle. (OMG, you guys! I want to start a band and call it “My Sartorial Devolution.” Why, oh, why was I cursed with zero musical talent?!)

While living in Paris or New York, I wouldn’t have left the house without “puttin’ on the dog,” as my mother from South Carolina would say, For those of you who don’t speak Southern, that means “getting all gussied up.” Nowadays, I rarely even put on the cat. Seattleites (Seattlians?) don’t do a whole lot of gussying up. In my neighborhood (Capitol Hill), if you see a woman all decked out in a fancy dress, it’s a safe bet that she also has a penis. There’s certainly nothing wrong with that, but as a result, nearby shoe sellers only carry pumps in Size 11 and above. Sigh.


About a year ago, I went through a phase of “going native,” clothing-wise. Lacking a day job that would require me to dress like I wasn’t asleep, I just wore jeans and t-shirts all the time. After a while, the gender-neutral clothes started to make feel antsy. Miserable, really. So much so that the experience left me feeling a kinship with male cross-dressers. I, too, was seized with an uncontrollable urge to put on lots of makeup and high heels. Almost like a fetish. Yes, my friends -- I wanted to dress in drag.
The uber-girly part of me will never be able to wear a Sponge Bob t-shirt in public. Which brings us back to the question of why I bought it in the first place.
Which brings us to the next contestant on The Shirt Is Wrong… 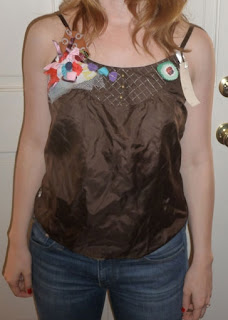 Oh, where to begin?
This shirt I bought in a space-themed boutique that (huge shock) no longer exists. It was the kind of store that sold things like gilded fake deer heads, and various trendy novelty items. Lots of artsy wallets and tote bags with poodles on them. Oddly, they couldn’t make a go of it in the economic downturn, when the global Ironic Poodle Wallet markets were collapsing.
The above is one of those “vintage hybrid” abominations you sometimes find in places like Seattle or Portland. Here’s how it works. You start with a bong “vintage” (read: old, polyester) shirt you find in a dumpster thrift store. Then, you take some bric-a-brac from in another dumpster vintage boutique. After doing about 20 bong rips, you decide to sew little pieces of fabric onto the original, crappy shirt. A blindfold is optional.
And yes, that is white plastic mesh at the base of the… flower-thingy? The kind of mesh you would use in fishing, or industrial flower-sifting. You could sit around wondering why, but, trust me, it’ll just make your head hurt.
This top (blouse?) is blousy and unflattering, and made of synthetic fibers. It looks like a Lawn & Leaf bag. And I hate the shade of brown.

I wish I could say that the only reason I bought it was because I felt bad for the guy who ran the place. He was really nice, and clearly loved selling poodle wallets. At the time, I walked past the place every day, and it was apparent that business was not booming. But my reasons weren’t entirely altruistic. Some part of me actually liked this, if only at the time of purchase.
I blame Molly Ringwald.
Like many people who were young, impressionable kids during the 80s, I received permanent brain damage from watching too many Molly Ringwald movies, which were in a near-constant loop on virtually all cable channels. In the universe inhabited by her endlessly plucky, adorable characters, crap like this would’ve actually looked good. Or at least, it would’ve become a symbol of her third-act redemption.
F. Scott Fitzgerald once said that there are no second acts in American lives. Alas, the same is true for “vintage hybrid” tops, which, despite their best hopes, hold no promise of redemption.
Tune in next time for the finale bel grande of the Museum of Bad Fashion Choices! Little Plaid Riding Hood, Darth Maul meets Grace Jones, a highly flammable polyester leopard-print dress, and… well, that’s pretty much it.
Posted by Marguerite Kennedy at 9:11 PM