Corporate Swag for Bears: Creating Jobs Today for Anthropologists of the Future

I get the most random online ads. Lately, I’ve been getting ads for Power Chairs, Weight Watchers, and the "Kim Kardashian Collection" of what appear to be flammable outfits for hookers.
Supposedly, these ads are generated by series of elaborate data matrixes. Programs called ‘bots’ gather information from our emails, Facebook posts, and/or the dreams and nightmares that we’ve forgotten by the time we woke up. Based on this data, marketers are able to form a rough composite of your soul buying habits.
In my case, Our Electronic Overlords seem to have formed the image of a saucy 900-pound grandma in a glittery halter top from Bebe, tooling around on a Rascal. (If I weren’t from Florida, this image wouldn’t leap to mind with such disturbing ease.)
Today, one of the best, and most random ads ever: from the Embassy Suites hotel chain, touting their “Build-a-Bear® Explorer Package.”  I had to click. 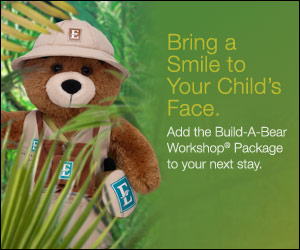 From what I can tell, they give you a bunch of Embassy Suites™ swag for your kid’s (not included) Build-a-Bear® teddy.

Your kid’s bear will be the envy of all the other Build-a-Bears in the subdivision with its beige polyester Embassy Suites™ vest! The bear can pretend to be a valet parking attendant! Sure, your bear once hoped to dress up like a doctor or scientist or even a cowboy. But, hey, times are hard. At least he has a job. 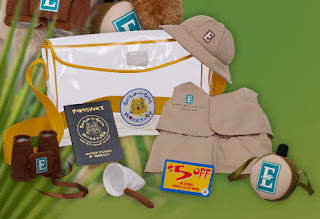 Included in the package is “an Explorer hat, vest, pants, binoculars, canteen, and butterfly catcher,” each embossed with the Embassy Suites logo. You know, in case you & your bear want to go on a nature safari in the parking lot outside the Embassy Suites in Des Moines while Dad’s at that dentists’ convention.
More hotels should jump on the bandwagon with teddy bear swag. I’m imagining the “La Quinta Inn off I-95 Build-a-Bear Package”… It would include a little pair of ripped fishnet stockings, a fake condom (possibly the repackaged Embassy Suites “butterfly net” – look at that thing…), and a bear-sized halter top from the Kim Kardashian collection. You see, this bear is a hotel Parking Lot Explorer of an entirely different sort, as he or she had to become a hooker sex worker to support a crystal meth habit an elderly uncle.
The whole thing with corporate swag is just going too far. It used to be that companies would give out a pen or a notepad with their logo on it, but now it seems companies will slap a corporate brand on just about anything. Nobody ever wants or uses that slightly-defective Novelty Flying Disc given out by the sewage treatment company, or those Halliburton stress balls they give out at World Domination conventions.
This, along with all the plastic crap in the As Seen On TV aisle at Walgreens, is why the earth is dying. Why don’t they just minimize the damage, and put corporate logos on the EZ Egg Cracker (per previous post) or the fat-burning weight loss belt?
The only consolation for me is that in 10,000 years, anthropologists are going to get to write some AWESOME, highly speculative papers about the stuff they mine out of 21st Century landfills. As someone who once studied Classical Archeology (as an English major, I needed something to fall back on…), I feel an affinity with our oh-so-distant descendants sifting through the garbage that defines us. I wish I could be there to watch as they defend their dissertations (e.g.,Ginzu Knives: Transformative Symbols and Non-Local Imaginaries in Mid-Empire America, by Velveeta Chang-Singh).

Maybe, hopefully, they’ll re-imagine our cryptic, undying trash. Maybe they'll interpret our slicer-dicers as relics of ecstatic ceremonial rituals. Instead of seeing all our crap as a harbinger of death, maybe they’ll see these objects as material evidence of how utterly and completely we were alive.
More likely, they’ll just think we were a bunch of idiots. But, then, they’re the ones studying us. So there, distant-future humans! Joke’s on you! We may be dumb, but you’re still not on a tenure track, and probably never will be.
Posted by Marguerite Kennedy at 3:16 PM