I *heart* Vancouver. To prove this point, I now have no less than six different kinds of moose-related paraphernalia. Yes, even moose-scat candy. I’m pretty sure proof of purchase is required at the border, or they don’t let you leave Canada.
Every city has its iconic emblems that are transformed into crappy plastic “novelty items” made by five-year-olds in China. These are then sold on the city’s streets by recent immigrants from places that we, as Americans, find hard to pronounce. In New York City, for instance, tourists are inundated with an endless selection of miniature Statues of Liberty and Empire State Buildings. In Seattle, it’s the Space Needle. In Los Angeles, it’s miniature replicas of fake boobs (or is it douche bags?).
In Vancouver, the moose is the ubiquitous and enduring symbol of the city. You’d think the place was crawling with the suckers. And yet, I did not see one actual moose the entire time I was there. Admittedly, we didn’t get out of the city limits, where due to zoning regulations the moose (mooses? meese?) may be required to stay indoors. 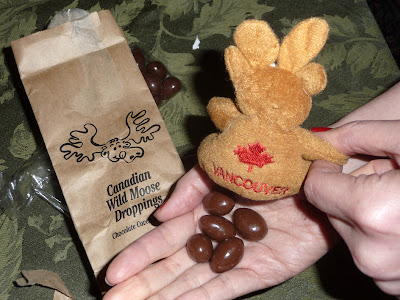 It seems that every retail establishment in Vancouver is required to have a minimum of five (and preferably over 100) moose-shaped or moose-themed items, or Official Moose-Related Crap (OMRC). Sometimes, this takes on a disturbingly literal form, as seen in the diverse range of “moose droppings” candy. In the bag pictured above, you’ll notice that the moose on the cover is licking his lips, evidently delighted at the thought of eating the poop of a fellow moose. Not that I’m judging his fetish, mind you. What two mature, consenting  meese do in the privacy of their renovated Vancouver loft is nobody’s business but their own. But still. Gross?
The Moose Mandate seems to apply to all establishments, from the downtown souvenir shop to the gay S&M shop in the West End (which I bet has some pretty imaginative OMRC). Think a kitchen & restaurant supply store would be an exception to this rule? I, too, underestimated Canadian ingenuity, and their fealty to the lethargic, wide-horned beasts. Unfortunately, the shop in question didn’t have a moose-shaped Cuisinart (oh, how I wish!) or convection oven, but they did have the cookie cutter pictured below.﻿ ﻿
One of the biggest differences between Canada and the U.S. is that they have entirely different T.V. commercials.  Even ads for American companies, such as Taco Bell or Wal-Mart are carefully tailored to Canadian sensitivities (i.e., lots of moose-related graphics).

Also, there’s the language barrier. Instead of the correct, American pronunciation of “house” (haus) they say “hoose” (rhymes with “moose” – coincidence??), and "oot" (hoot, without the "t") when they mean "out." Thus, we must assume that Canadians must rush oot of the hoose when they see one of these:﻿﻿﻿﻿﻿ ﻿﻿﻿﻿﻿American viewers will notice that TV ads in Canada refer viewers to websites that end in .ca, instead of .com, even when it refers to the exact same product. Basically, the information has to be re-worded so that it will be less offensive to our calmer and more balanced neighbors to the north. For instance, companies try to eliminate strong language and adult content (i.e., exclamation points). Canadian TV seems to provide even more parental advisories than in the U.S., which I didn’t think was possible. One program warned viewers after every commercial break: “The following program contains strong language. Viewer discretion is advised.”

The program? Restaurant Makeover, on the Food Channel. (I swear to God.) I watched the entire show, and didn’t hear anything that might’ve resembled a four-letter word. It was the Canadian version of the show, and things did get a bit racy at one point. The interior designer working on the restaurant disagreed with the construction worker about how to lay some tile, and the designer used the imperative form of a verb! Hopefully no young Canadians were damaged.

Also, Canada seems to have a lot of commercials sponsored by the government and/or Taco Bell. Many are public service announcements, kind of like those The More You Know “public service” segments that air on NBC. Only, in Canada, the public service announcements aren’t just stating the obvious (“Drinking drain cleaner may be fun, but it can cause intestinal problems, too!!”). Instead, the spots are about actual services available to the public, such as getting a free taco at Taco Bell. (Okay, that one may not be a government program, although National Taco Service has been a hot-button issue in the current Canadian election cycle.)

Most of the government-sponsored ads feature a video clip of a rather annoyed-looking moose.  Possibly the only moose in Canada (or the world), the poor beast looks like he just wants to go about his moose business without being a symbol of Canadian National Pride.

I’m sure he feels a beleaguered solidarity with the bald eagle who’s featured in virtually every U.S. political ad. That bird just wants to get back to disemboweling already-dead rodents (yum!). After all, he never asked to be an inadvertently ironic symbol of American awesomeness. The moose, similarly, never asked to be a symbol of Canada’s love of odd-flavored potato chips, and yet, that’s what his life has turned into. If he could write a stern (yet very polite!) letter, I bet he would.
Tune in Tomorrow for Part Two of Oh, Oy, Canada!, as we explore their policy of kinda-sorta not-illegal-ish marijuana, TacoBell.ca, and why the American DEA is more powerful than the Queen in Canada, although the DEA is not (yet) featured on any coins.
Posted by Marguerite Kennedy at 4:06 PM