Toxic Waste: Not as Healthy as Originally Thought

As nuclear power plants face crisis in Japan, a related scare is raging in the United States.
For the second time this year, the makers of Toxic Waste™ Nuclear Sludge candy bars have been charged with distributing products that are … actually toxic. Samples of the “Hazardously Sour Candy” (no, seriously -- that’s the tagline) were found to contain “more than twice the legal amount of lead” under FDA guidelines. In March, it was discovered that the company's  Short Circuits bubble gum had also experienced a lead malfunction.
Although no illnesses have been reported, the sour sweets were promptly pulled from the shelves. At greatest risk are “small children and pregnant women,” and people who’ve “eaten a lot of these bars… on a regular basis.” (And who doesn’t??)  But, seriously. If you’re feeding your infant a steady diet of Toxic Waste™ Nuclear Sludge bars, exposure to lead is probably the least of your kid’s problems.

Still, customers were shocked and dismayed to learn that their poison-themed candy turned out to be unhealthy. Which is like being surprised when your Barf Bag™ candies make you… well, barf. ﻿﻿
﻿﻿Amazingly, the Toxic Waste and Barf Bag candies are not – BY FAR –  the most bizarre or disgusting “food” (quotes are key) on the market. Kids love gross-out edibles, which explains things like Ear Wax Gummies or Candy Boogers or Ketchup Flavored Potato Chips (sorry, Canadians, but that’s just nasty).


These days, competition is vigorous among confectioners who want to make “foods” that are at the intersection of sweet and repulsive.  To wit: the seemingly infinite range of scat-based confections, each grosser than the next.  Chocolate dog doo (yum, right?) looks pretty appetizing next to the Chocka Ca-Ca Dirty Diaper Candy. Each “diaper” contains a chocolate caramel “Turdle.” You know, like a Turtle’s candy, but… yeah.
Do you love urine? When you’re in a doctor’s office, do you feel a compulsion to just rip the caps off of all those urine sample containers, and drink ‘em on down? (Come on, you know you do!) If so, you’ll loves you some Liquid Candy Urine Samples!
This liquid candy simulates the experience of breaking into a medical testing facility and drinking the samples, only not nearly as hygenic! And because it’s liquid, you don’t have to burn any extra calories by, you know, “chewing.”  Besides, if you’re eating this stuff, your teeth probably fell out a long time ago.
My all-time favorite has to be Sour Flush, a candy packaged in a plastic toilet with an adorable, edible plunger. (Why don’t parents just give their kids some black tar heroin, and be done with it?) 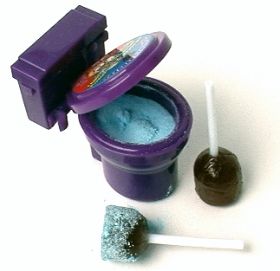 Okay. The “plunger” is basically a generic lollipop. Lick, then dip into the powdery blue “candy” into the toilet, and… enjoy!  (Ideal for young Meth addicts in training!) At least you can’t say that the packaging is deceptive. Here’s a hint for young parents concerned about their kids’ nutritional habits: if a “food product” is served in a plastic toilet, it’s probably not super-duper good for you.
And yet, we scratch our collective head over the rapidly growing rates of Type 2 diabetes (what used to be considered the “adult onset” kind) in American children. According to the American Diabetes Association, one in six children in the U.S. is pre-diabetic, a series of conditions liked inextricably to obesity. Which isn’t helped by feeding kids from plastic toilets full of metaphorical, if not literal crap.
Oh, well. At least it’s probably better than the crap they serve at Taco Bell. And less rat feces. Wait, isn’t that a caramel candy served out of the butt of a plastic rodent?
Somewhere, sadly, that has to exist.
Posted by Marguerite Kennedy at 4:05 PM