One of the most entertaining things about blogging is looking at the “stats.” In the case of Marguerite-aville, the vast majority of visitors are purely accidental tourists. People from, say, Turkmenistan or Brazil, sucked in by a misdirected Internet search for photos of J. Lo’s derriere, or, more disturbingly, a naked Sponge Bob (no, seriously – see below). I especially love the lists of search terms have led poor, unsuspecting perverts to this blog. Below are but a few examples.
-- whimsical toilet paper holder with man riding unicycle
-- forklift caterpillar eh malfunction
-- had a rent stabilized apartment
-- nuclear waste not healthy
-- dr puffer bong
-- pauly d no hair gel
-- sponge bob no pants


Some of these at lease remotely relate to posts I’ve written. There was one about Sponge Bob, but he (thankfully) kept his pants on. For others, I have absolutely no idea how the key words could’ve triggered a search-engine hit. For instance, I’ve never, ever written anything about malfunctioning forklifts. Or even normally-functioning forklifts.
By design, this blog doesn’t have any specific focus. But it seems fair to say that the very OPPOSITE of its focus would have to be … malfunctioning forklifts. Similarly, I have no recollection of ever writing a post about whimsical toilet paper holders, sans or avec unicycles. Which makes me a bit sad. Blogs with posts about whimsical toilet paper holders are inherently better than blogs without them.
Each of the above search terms offers a fragment of a view into the lives and longings of a few random strangers. The enjoyment I get from these lists makes me think of Proust, who famously loved to read train schedules in bed. He would imagine the people getting on and off at each stop, and their motives for taking the train from, say, Limoges to Marseilles.  Before nodding off to sleep, he liked to contemplate the passengers motives and trajectories, both on the train and in life. Were they travelling to see a lover? To go to the funeral of an emotionally distant, but beloved father? To get some sun to soothe a nasty case of syphilis?
Like good ol’ Marcel, I like to think about the person, somewhere on this wide green earth, who has a whimsical toilet-paper-dispenser-shaped hole in his or her life. A gift for a unicycle- and/or toilet-paper-loving aunt? Is the need for “whimsy” compensating for some recent, tragic loss? Is there a middle-aged husband, somewhere, who will think the man on the unicycle is mocking his failure to get that promotion at work, and his rapidly receding hairline?

I’ve never been a fan of the word “whimsical.”  It’s a kissing cousin of my second-least favorite word, “humorous.”  In general, so-called “humorous” people or things aim to be “amusing” -- i.e., “funny,” but in a way that won’t actually make you laugh. Inspire a polite and/or nervous giggle, maybe, but nothing so déclassé as an actual laugh.  (Unless, of course, “humorous” is a misspelling of a bone someone broke while slipping on a banana peel.)  Self-described “humorous” people use words like “whimsical.” They also tend to use words like “utilize” when they could just as easily say “use.” But that’s another issue altogether.


I started to wonder about the fantastical man-on-unicycle toilet paper holder. Like the person misdirected to this blog, I couldn’t find it. But I did come across an undiscovered world of novelty toilet paper dispensers. (More things that will inspire great Ph.D. topics for anthropologists of the future.)
For instance, there’s a whole range of toilet paper dispensers featuring butlers holding their noses... 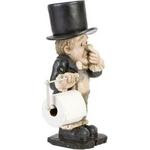 Or humiliated maids covering their eyes... 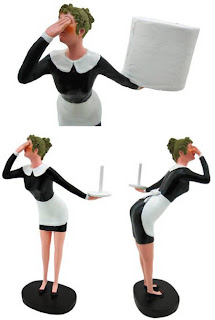 Sometimes, for no apparent reason, the butler is an anthropomorphic frog in a bowler hat...

Unfortunately, these are things you can’t un-see. So, for all you mis-directed readers, I apologize.

How do you say “I’m sorry” in Turkmenistan?
Posted by Marguerite Kennedy at 9:35 AM