Caving as a Caveman 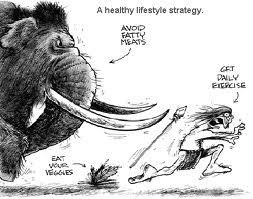 As for the Caveman Diet, well… I caved. To be honest, I only lasted a few days. Cheese and crackers, offered by The Calf & Kid, beckoned me to return from the Paleolithic to the Atomic Age.


I hate diets. As soon as something is forbidden -- even if it’s something I don’t even eat very often --  suddenly, I can think of nothing else. On the Caveman Diet, that’s how I felt about bread, and cheese, and other products of that crazy thing we call the “Agricultural Revolution.”


The last time I went on a diet was shortly before we got married. At the time, the South Beach Diet was all the rage, so I decided to give it a go. If you’re not familiar, the first two weeks are pretty extreme; almost no carbs of any kind, very low fat, etc. Lots of baked fish and steamed vegetables, but without any salt, oils, or aerosol canned Cheese Product. It’s supposed to be “delicious” and “filling,” but (spoiler alert!) … it’s not.


Around the eighth day of the diet, I found myself in the bread isle of a grocery store, determined not to fall victim to the siren song of the refined carbohydrates. For the next half hour, I found myself wandering around the store, clinging to a loaf of actual Wonder Bread (something I never normally eat), cradling it in my arms like a beloved newborn baby. Ignoring the strange looks from fellow shoppers, I shoved my nose in the top of the bag, savoring the aroma of the high-glycemic, low-fiber goodness.


That’s when I realized that there’s a fine line between a low-carb diet and prisoner interrogation strategy. If I were a terrorist suspect in Guantanamo, all they’d have to do would be to put me on the South Beach Diet. After the first two weeks, I would happily make up any number of damning lies about my family, country, or heritage in exchange for a small crust of delicious, high-carb bread.


Of course, the real South Beach diet is something else entirely. I’m pretty sure it involves an eight-ball of Peruvian blow, black coffee, and a gallon of Captain Morgan’s rum. (You may or may not die on this diet, but either way, you’ll definitely loose weight.)


Maybe it’s my years of living in France talking, but I don’t think bread is the enemy. I’m one of those nuts who believes in that crazy fringe theory of dieting, known as “eat less, exercise more.” Say this out loud, and people tend to just look at you and shake their heads, as if you were one of those people who thinks 9/11 was really the work of a covert group of German Shepherds trained by the CIA.


Amazingly, Paul is still going strong on the caveman diet. But the life of a hunter-gatherer isn’t easy -- he’s eating a lot of fruits and nuts, which he foraged down at Safeway. Even though he’s not eating bread or cheese, at least he has the consoling fullness that comes from winning a bet with one’s spouse. Which is almost, but not quite, as delicious as a big, fat slice of pizza.
Posted by Marguerite Kennedy at 4:57 PM