Our Parasites, Our Selves 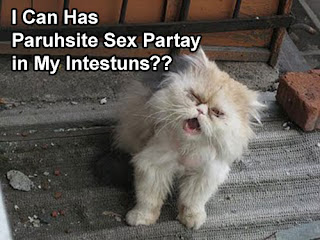 I’m completely fascinated by parasites. And no, I'm not talking about the lesser-known Baldwin brothers, or anyone from The Real Housewives of Schenectedy, Celebrity Housecat Rehab, or related programs on Fox. I mean literal parasites. The kind that, right now, may be dwelling in your brain and compelling you to buy a pair of terribly impractical shoes, and/or making you more neurotic.
Yesterday, I was listening to an old podcast of This American Life that featured an interview with Carl Zimmer, author of a gross-but-interesting tome called Parasite Rex. He was discussing the subtle, yet diabolical agendas of various parasites, including my very favorite: an intracellular protozoan called Toxoplasma gondii, or “Toxo,” to its home-protazoans. It may seem a bit weird to have a favorite parasite, but I have a soft spot for these critters. (And yes, I have written about this in previous blogs, but mind-altering micro-bugs are a topic that never gets old.)


According to some evidence, infection with Toxo makes women want to go shopping, and turns men into jealous slobs (no, seriously). Infection most often comes from exposure to raw or undercooked meat (esp. red meats, such as steak tartare), or through exposure to cat feces. The worldwide infection rate is about 30%, whereas in France, the infection rate is estimated to be as high as 85%. This is possibly because of the French fondness for eating raw foods, such as cat feces tartare.
In humans, infection is usually asymptomatic. However, if you're a woman, it might cause you to dress like a hooker, and may lessen your impulse control. If you're a man, Toxo may make you chronically jealous, only in part because your girlfriend dresses like a hooker and lacks impulse control.


Professor Jaroslav Flegr of Charles University in Prague has postulated that Toxo infection can actually alter the personalities of those infected. He found that women with latent Toxoplasma "spent more money on clothes" and were consistently rated as more attractive. Also, they were “less trustworthy” and “had more relationships with men.”

Infected men, on the other hand, tended to pay less attention to their personal grooming habits, were more quick to fight, and tended to dislike following rules [INSERT TIRED JOKE ABOUT MEN NEVER ASKING FOR DIRECTIONS].

Soooo ... the parasites make women like to shop, wear makeup, and have sex with lots of different men. And it causes men to be slobs who are often jealous. In other words, they've finally discovered the cause of heterosexuality.

Of course, we all know that a correlation is NOT the same as causality, blah, blah, blah. But that's really boring, and quasi-scientific speculation is much more entertaining. For instance, I wonder if someday, the bad behavior of Toxo hosts will be excused with a doctor's note?
"Honey, it wasn’t my fault – I didn’t want to impulsively buy all those clothes at Bergdorf's, but I had to have something to wear for when I went to that hotel to meet all your friends to make that raunchy video that's been going around the Internet! My parasites did it for the lulz!"


Why do the parasites have this effect on humans? What are the ultimate motives of this brain-altering micro-bug?
As it turns out, we’re just collateral damage in a very literal cat-and-mouse game in which parasites are the puppet masters. Toxo typically spends the first part of its life—the “asexual phase”—in a rat or mouse. However, sexual reproduction can only take place in the digestive tract of a feline (and you thought your ex-boyfriend had some weird fetishes…). For these guys, Fluffy’s intestines are like Cabo San Lucas during Spring Break. But to get there, the parasites have to rely on a bit of manipulation. They chemically alter the brains of infected rats and mice so that the rodents lose their innate fear of cats.


Infected rodents are also more likely to engage in “novelty seeking” behavior, such as walking right up to a cat and saying, “Hey, man, we should totally hang out sometime!” To which Fluffy says, “How about now? I have an Xbox 360 in my intestines!” The cat then opens his mouth, and the mouse walks on in, looking forward to finally getting to play Portal 2.

Eventually, the cat expels the Toxo oocytes through the scientific process known as "pooping." A hungry mouse will then eat the cat poo (mice, it seems, have a cat scat fetish). And the beautiful dance of life continues…


Humans are a "dead-end" host for this parasite, which just wants to go about its business via the magical cat poo/rodent/cat poo merry-go-round.  Ending up in humans is just an added bonus. Or is it???

Maybe, deep down, the parasites really just wanted to go to Neiman Marcus to buy impractical shoes, but lacked the feet?  So they went to Oz and the Wizard gave them a magical hot-air balloon made of cat feces, to take them home ...
Posted by Marguerite Kennedy at 11:22 AM