Thing #37 You Should Know, But Never Asked Me to Tell You About Seattle

Because I'm lazy, I've decided to serialize my lists of Things I've Learned About Seattle. In no particular order, here is #37...

Everyone is covered in tattoos ... and I mean covered. I have nothing against tattoos, or anyone who has lots and lots of them. It's just that this is something that jumps out at a lot of people who come here from other places. On the East Coast, tattoos are far from unusual, but we tend to have one or two, rather than one or two thousand, and they tend to be on parts of the body that are normally covered when wearing, say, a full-on snowsuit.

Here, the one-upsmanship among Body Art aficionados has escalated into a full-on proliferation on a par with the US-Soviet nuclear arms race.As I write this, I’m sitting in a café called Bauhaus, where I’m the only person with less than twelve visible tattoos. What’s amazing is that most of these people seem to be under 25. It’s one thing to cover yourself in tattoos slowly, but if you’ve taken up all the real estate on your skin by age 22, you’re going to want to start over by age 35. At that point, it’s possible—just possible!—that you may not still be into that Emo band whose name is prominently tattooed on your neck and/or eyelids. 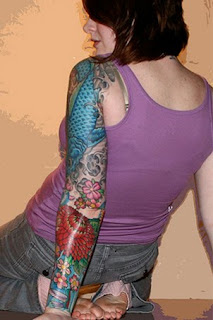 Instead of having single, separate tattoos, in Seattle it’s common to have your arm covered in what’s known as a “sleeve,” which means that if you have extra money, you should consider investing in the fast-growing industry of laser tattoo-removal services. I predict they will be doing an excellent business in about 15 years, when the current 20-year-olds move to the suburbs and are trying to get into the local country club and finally realize the irony of those ironic “Fuck Irony!” tattoos emblazoned on their knuckles.
Don't get me wrong. I don't dislike tattoos. I have two myself, but in the Pacific Northwest, they don't count, since a) I only have two b) they're small, and c) they're not on my eyeballs.
In general, I feel about having lots of tattoos the way I feel about dogs. I like other people's dogs/tattoos of dogs. But I don't feel the need to have them personally. As I type this, I realize that I'm feeling the need to apologize for my lack of Body Art. (Note: Feeling the Need to Apologize for Weird Random Things=Sign #48 that you've been in Seattle just a little too long...)
Posted by Marguerite Kennedy at 12:07 PM