It is a truth universally acknowledged, that a man in possession of an electronic device featuring a woman’s voice will instantly turn into an eighth grader and pose all manner of dirty questions to said device. Women, as it turns out, aren’t very different.


I mention this because Paul and I finally got iPhones. The latest model features Siri, Apple’s voice-activated virtual servant who will do stuff for you if you ask her the right way (cue Beavis & Butthead: “Heh…heh heh. Do stuff. Heh.”). Even the most mature and intelligent person would find it hard to resist the urge to test her electronic limits.  So, if you’re me, it’s downright impossible.

Although I don’t have any statistics to back this up, it seems safe to assume that the #1 question asked of Siri by new users is, “I want to find a hooker! Heh heh…heh” and/or “score some weed” (Heh heh…heh). For most of the obvious off-color questions, she’s trained to say, “I didn’t understand your question,” followed by an implied  “….dumbass.”  Sometimes, she politely plays dumb: 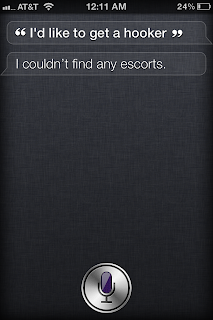 Clearly, she's not trying very hard. Besides, you can practically hear Siri rolling her nonexistent eyes. I half expected her to say, in her perky, nurturing voice, “Why don’t you grow the f—k up already?”
To get some baseline data, we tested her functionality with a fairly normal request. “I want Chinese food delivery!” Based on our GPS configuration, Siri immediately came back with a list of 10 or so Chinese restaurants in various parts of town. Seattle—our neighborhood in particular—has a painful dearth of Chinese restaurants that deliver (keep this in mind as you read on).


Paul and I had to laugh out loud. You see, we live in Seattle’s Capitol Hill district (think: the Chelsea neighborhood in New York, or pretty much any part of San Francisco). Here, you can’t throw a stick without hitting a sex-positive, womyn-owned purveyor of sundry Marital Aids and/or crotchless aardvark suits. Without hyperbole, there are at least ten times as many Adult Retail Stores in our vicinity than Chinese food restaurants—which Siri found with head-spinning alacrity. Hell, some of our local Adult Retailers probably even deliver. Maybe if we order a case of dildos, we could get the nice womyn to pick us up some General Tsao chicken on the way over?


At any rate, it’s clear that Siri is a bit of a prude. I vastly prefer the Beta version (in the bow-tie):
Yes, in 1987 Apple produced a short video introducing their crazy-futuristic (at the time) vision of Virtual Assistant who was played by Dr. Who. (Remember that episode where the TARDIS traveled to Palo Alto in the '80s, where The Doctor filmed this video and did a mountain of blow—not necessarily in that order—before traveling to the future and smacking around the people who invented Siri? It's on Netflix, I'm pretty sure.)

I have a feeling THIS dude would know where you could buy a Hitachi wand after midnight on a Tuesday. And he wouldn’t be cheeky about it.
Posted by Marguerite Kennedy at 2:27 PM No comments: Links to this post

For the past few weeks, I've been on the lookout for falling anvils, choking hazards, and any cheetahs that may have escaped from the local zoo. Why? Because I failed to eat Hoppin' John on New Year's Day. Growing up, my mother and grandmother, both natives of South Carolina, were fairly convinced that the fabric of space and time would collapse if we should ignore this ritual. There's a fine line between a cultural tradition and a symptom of Asberger's syndrome; in my family, when it comes to Hoppin' John, this line is completely blurred.

Now, all you Yankees (i.e., folks from New York, California, Bangladesh, etc.) may be wondering, "Who the f**k is Hoppin' John, anyway? A hyperactive blues singer? A lesser-known character on The Simpsons? That horse they had to put down after the Kentucky Derby?"

Neither an animal nor a banjo player on meth, this starchy dish is a rather bland mixture of black-eyed peas, rice, and sundry spices that Southerners of all ilk eat on the first day of the year—and pretty much only then. Growing up, on New Year's Day, we would always have Hoppin' John and "a whole mess" (i.e., a great deal) of collards.

“The greens are the dollars, and the peas are coins,” my grandmother used to tell me, although the idea of eating money, even symbolically, always seemed a bit unsanitary. “Eat up, if you want to be healthy and wealthy in the New Year!”
In my family, failure to observe this culinary ritual had serious ramifications. My grandmother had any number of cautionary tales about the years she neglected to eat black-eyed peas and rice on New Year’s Day.  The year my grandfather died, for instance. Sure, the doctors called it “congestive heart failure,” but Grandmama knew the truth. It was the Hoppin’ John (or the lack thereof) that did him in.

I’m not nearly so superstitious, but usually I try to keep up this tradition. But, as it turns out, black-eyed peas are almost impossible to find in Seattle. I get the feeling it would be easier to score black-tar heroin (whatever that is) in this town.


“You mean, like, the band?” Asked the grocery store clerk, when I asked him where to find black-eyed peas. He was 19-ish, with a name tag that read “Tyler.” He seemed seriously stoned. At least, I gave him the benefit of the doubt by assuming that he was.

Clearly, the idea of a food sharing the name of Fergie’s band was blowing young Tyler's mind. He just looked at me, as if I'd asked for something completely crazy, like, say, unicorn steaks—even though everyone knows unicorns are endangered and killing them is just plain wrong!

“Little bean? Black... eye?” I attempted a descriptive gesture, which proved futile. Legumes are hard to pantomime.
Tyler just stared. For a long time, as if he went off on a magical journey to a cartoon wonderland inhabited by anthropomorphic black-eyed peas who giggle and slide down rainbows. In his imagination, maybe they even offered trivia about the word for "bra" in Indonesia, like the sassy bean in this Japanese commercial:

“If it comes to it, just use canned,” my mother suggested. A concern that bordered on fear came through in her Carolina drawl.  “But only if you absolutely have to.”

“No canned either. No black-eyed peas of any kind.”

“So just use frozen.”

Some years back, I forced some Yankee friends to experience the Hoppin' John and collard greens tradition on New Year's Day. I insisted to my friends that this meal would be the key to all things good in the coming year. Over the next 12 months, the friends in question would lose their jobs, break up, and move back in with their respective parents.

When I told my mom this story, she just shook her head. "Shouldn't have used canned."
Posted by Marguerite Kennedy at 5:52 PM No comments: Links to this post