Yesterday, I won a contest sponsored by Capitol Hill Seattle (CHS)— an addictive website that is my go-to source for information on all the gruesome murders and/or hot new restaurants on "The Hill," the (incidentally, Capitol-free) neighborhood in Seattle where I currently live.  This was pretty exciting, since I hadn’t won a contest since the first grade, when I took the grand prize in a watermelon eating competition. (I lived in the South and went to public school, so eating contests were a core part of the curriculum.)
This time, the contest involved “conversation hearts.”  You know— those chalky, cheeky candies that pop up like a cold sore around Valentine’s Day, bearing messages that sound like they might’ve been written by Popeye the Sailor Man, e.g.,  “Be Mine,” “Hot Stuff,” or, simply, “Hey.” The goal was to think up something more interesting to put on them than the usual schlock. My suggestion was for a heart that reads “GGG,” per the oeuvre of Dan Savage, Seattle’s favorite local  and national sex advice columnist. If you don’t know what “GGG”—Good, Giving, Game—means in this context, please stop whatever you’re doing and go read the archives (the annals, as it were) of Savage Love until you get it. If necessary, take a day off work.
So, the nice people at CHS made the mistake of giving me some lovely homemade conversation hearts, along and two edible-ink pens to make my own captions (thanks, Em!). These are actually much tastier than the ones you get in a box, and you can whip up a batch of your own with their recipe for DIY hearts! 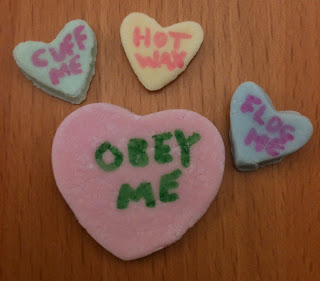 There are more, but I'll stop here. Have a G.G.G. Valentime's Day, and to all a good night!
Posted by Marguerite Kennedy at 8:55 PM