So, the top of the space needle is now a shade of burnt umber, i.e., "orange." This dye job, like an aging husband buying some Just For Men hair dye, was in honor of the monument's big 5-0. It seems that the icon is having a bit of a midlife crisis, and is trying to relive its Mad Men-era youth (also, the building has started drinking at around 10 in the morning...). 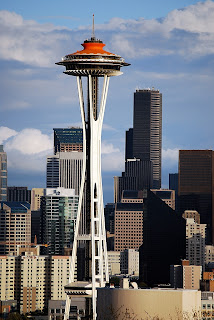 I'm now calling it the Space Pizza Hut, since it looks like the home of everyone's favorite pizza stuffed with hot dogs.

According to The Seattle P.I., Prince Charles -- or possibly his father, Prince Philip -- turned his nose up at the color choice back at the time of the World's Fair, opining that it looked like "the protective paint used on bridges."

At the time, I guess Prince Whatever was a guest judge on the now-forgotten TV sensation, "American Icon" -- a show where European royalty tears down the merits and self-esteem of aspiring U.S. monuments. Other judges included Princess Caroline of Monaco ("You call that an arch, St. Louis? I can arch my eyebrow better than that!) and King Juan Carlos of Spain ("Statue of Liberty? More like, Statue of Flab-erty! Loose a few tons,then we'll talk!").
Posted by Marguerite Kennedy at 11:54 PM